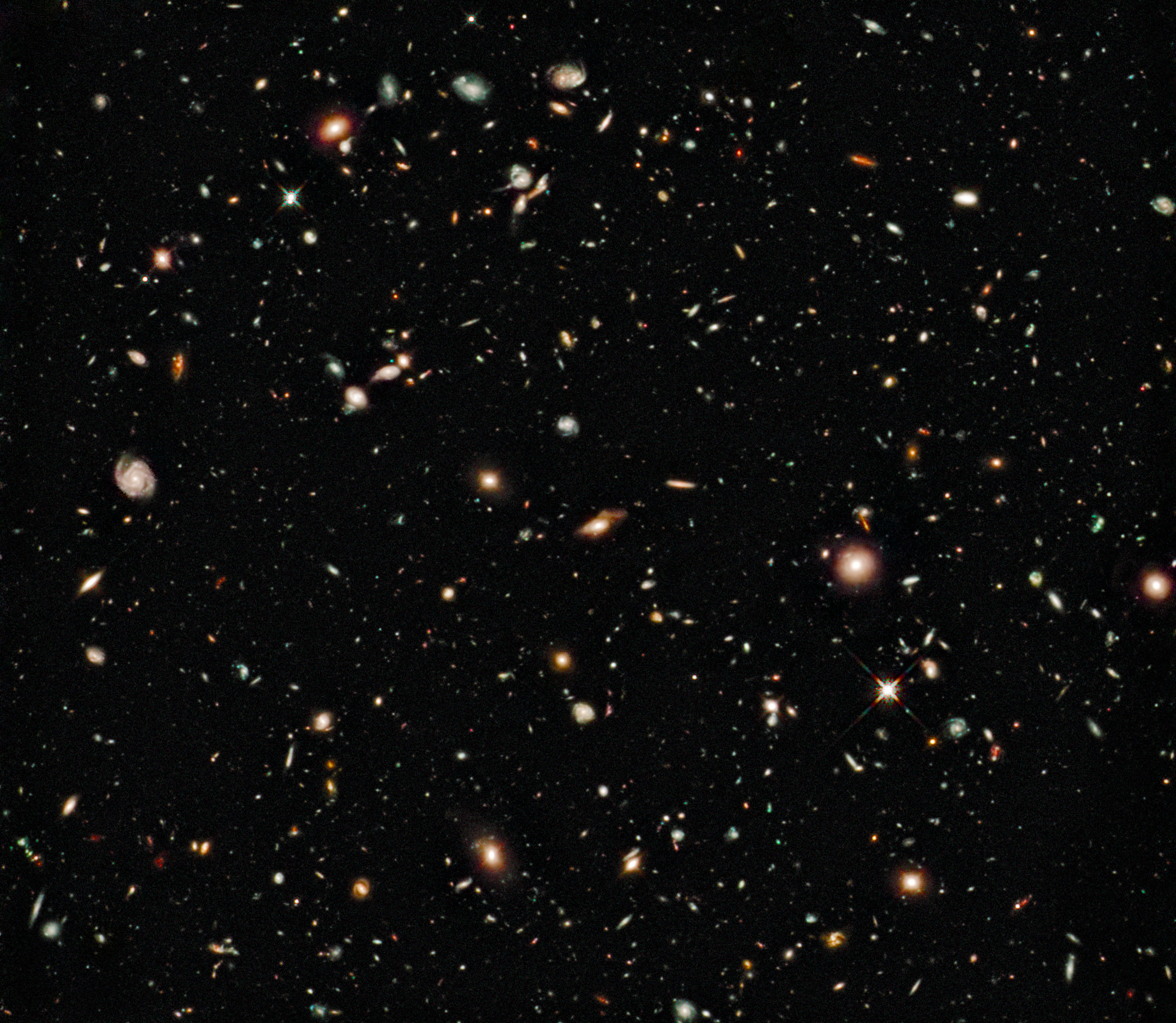 This photo is known as the Hubble Deep Field.  It was a series of photos taken in 1995 when the Hubble Space Telescope aimed at seeming nothingness in an area of space that covers one 24-millionth of the whole sky, or in layman’s terms, the angular size of a tennis ball at 100 meters.  You are literally looking back in time at roughly 3,000 galaxies, each containing billions of stars, the light of which took billions of years to reach us, and may only be the ghosts of what once was.  This photograph is very important to me because it represents something greater: when we cast aside the illusion of what we perceive, the truth behind that illusion can be freeing, magnificent, and unsettling all at the same time.  The Hubble Deep Field has changed my life, but in order to tell you why, I want to invite you to go back in time and focus on the Deep Field of my life.

It’s been 3 years since my life has changed completely.  The truth is, most of my life has been a well-crafted illusion lived out with expert precision.  Some of you could see through it, but didn’t quite know what was behind the facade.  Most of you bought it hook, line and sinker.  I have been afraid to tell this story for some time and worry, even now, how it will be received.  My hope is that it will help someone, and that maybe, they will start a new path as well.

I’ve grown up as a Christian since I was a child.  My dad was a preacher and both my parents taught in the Christian school I attended.  After high school, I went to a Christian college for 5 years.  Sensing a pattern?  As a result, God and church were an ever present thing in my life.  Come to think of it, there weren’t many times where I wasn’t doing something related to Christianity.  This doesn’t sound so bad, and for the most part, it wasn’t.  However, for one reason or another, I always felt an invisible pressure: pressure to do it right, pressure to be perfect, pressure to live up to “God’s standard”, whatever that was.  I lived in a persistent state of “not good enoughness” and this pattern continued until August 28th, 2013.

On that day, I told my wife about the affairs I had engaged in during our marriage and about my ongoing addictions.  I devastated my marriage and lost my job in the church.  I wish I could say I came clean as the result of strong moral conviction, but it was really because someone else exposed my alter ego.  Sex had become my coping mechanism for dealing with being fake all the time.  Some people like booze, others like drugs, some even work themselves to death.  I chose something that was fairly covert because that went along with the masquerade of the perfect Christian boy.  How many times does someone get exposed as a cheater and the first response is, “Why in the world would he do that?  He was such a great guy!”  I was the Master Illusionist.

It’s been 3 years since that all happened.  I’ve definitely lost a lot and I’m more confused about things than ever before.  Right now, I’m not sure I believe in the literal interpretation of parts of the Bible, and I’m not entirely sure that God exists.  Let that blow your minds.  Here’s the thing though: I’m telling you the truth.  It’s surprising isn’t it?  I’ve had all the “answers” for most of my life because that’s what you’re supposed to do as a Christian.  Some of our oft repeated slogans are, “We answer to a higher calling,” or, “Hold every thought captive and make it obedient unto Christ,” or, “Onward Christian Soldiers.”  Christianity is replete with statements of fact and surety when attempting to explain confusing issues.  Some examples include: Creation of everything occurring in 6 separate, 24 hour days; God destroying everything and everyone with a flood because of bad behavior, then choosing to save 8 people, in addition to many animals, by having them spend 40 days and nights on a large wooden boat; God testing Abraham by telling him to kill his son, Isaac, only to let him off the hook after he was prepared to commit filicide.  I have great difficulty with these things and struggle to understand their meaning.  Although it would not be a snappy title, I must admit that if I were to write a church song right now it would be called, “I choose to search for God because it feels less random.”

The dogmatic wall that has been built by Christianity is keeping people from coming together and finding peace.  So many sermons are nothing more than a list of moralistic platitudes for a “better life”.  I’m tired of the exclusions, the rules and the judgement.  It seems as though church has, for the most part, become a university for acting, oftentimes with the best actors getting the most attention and acknowledgement.  Many churches have traded empathy, acceptance, open mindedness, and love for sympathy, rejection, closed mindedness, and exclusion.  The irony is that the figurehead of this acting school is Jesus.

I have many doubts, but the person of Jesus Christ is the one I doubt the least.  If you examine his life according to the gospels, he was a revolutionary; not a moralistic authoritarian.  He hung out with everyone that the church deemed “lost” and then empowered them to do amazing things by loving them regardless of their behavior.  More than that, I choose to believe that he fixed all of the crap that we do through his love, death and resurrection.  Empirically speaking, that’s complete hogwash.  There’s no way to prove it.  I know all of that and yet, for now, I choose to believe it.

It’s my firm assertion that my current reality is the direct result of the choices I’ve made.  My wife and I are separated right now because of my choices.  I have debts resulting from my choices that impede my financial momentum.  I am in good physical shape because I choose to exercise.  I make money because I make the choice to go to work.  I believe in Jesus to get through this stage in my life.  It’s really that simple.  Choices.

I do not believe that there is some cosmic puppet master in the sky who rewards me when I choose to go to a nice building every Sunday for a few hours, sing a couple of songs, talk with my eyes closed, and do it all over the following week.  Conversely, if I choose not to do those things, I do not believe that the aforementioned cosmic puppeteer will punish me, make my life worse, and then as a final act of righteous indignation, send me to be tormented for all eternity in a volcanic underworld governed by a horned, pitchfork-wielding demigod.  That is complete nonsense and is, at its best, abject slavery to a capricious bastardized form of Santa Claus.  If that’s God, I don’t want any part of it, him or her.  The truth is, I have no idea who or what God is, and while I am content with not knowing, I’m going to keep looking, listening and observing with all of my faculties.

My mind has really opened up this year to the fact that life is about choosing to connect with people, regardless of whether they agree with you or not.  I have been known by many people to be good at debating and I like doing it because I enjoy the sound of my own voice most of the time.  Recently though, the thought occurred to me, “What if for just once in my life, I shut the hell up and listened to people?”  If I’ve ever offended any of you in the past with my demeaning attitude, I’m truly sorry.  It’s my goal in writing this to open a forum for people struggling to be real.  I don’t care if you’re progressive or conservative, atheist or Christian, gay or straight, old or young.  I wish church was a safe place to bring all your doubts, fears, dark secrets and dirty habits, but most of the time, it isn’t.  If you need to get something off your chest, just message me and we can talk about it.  I’m not surprised by much anymore and frankly, it’s nice to know I’m not alone in my screwed-upness (If you will permit me to make up a word).

So, as Martin Luther said, “Here I stand, I can do no other.”  I’m healthier now today, more than ever before because instead of allowing fake people to have a voice in my life, I choose to stay true to myself.  I choose to follow the teachings of Jesus, and to keep an open mind along the way.  My goals in life are to meet as many people as I can, make as much money as I can, and then add value to the lives of the people I have met.  I don’t know entirely how I’m going to do all of that, but I plan to keep writing and thinking about it.  Thank you for letting me tell the truth.  Dig deeper and shatter your own illusions.  Find your Deep Field moment.

One thought on “Confessions of an Exhausted Illusionist”